We know you’ve probably got a lot of questions. So here’s a quick explanation of why this happened, what to expect and when you’ll start to see changes.

The world’s most powerful CA

Symantec’s new partnership with DigiCert truly is a perfect match—the two CAs are a perfect complement for one another. Now Symantec’s premium security offerings, powerful add-ons and unmistakable recognition will be undergirded by DigiCert’s industry-best validation practices and mechanisms, along with its universally trusted PKI.

Customers can expect to see:

Why did Symantec and DigiCert merge?

Symantec and Google had been negotiating for months regarding issues with Symantec’s PKI. After coming to an agreement on a fix, Symantec sold its SSL and PKI division to DigiCert in exchange for $950-million. Symantec also now has a 30% stake in DigiCert.

What does this partnership accomplish?

In the interim, it will keep all of Symantec’s currently issued digital certificates trusted. In the long run? The two companies will slowly merge, identifying the strength of each and using them to build a new, more efficient CA. The new PKI system is expected to go-live on December 1, 2017. This means all new, reissued, or renewed SSL certificates issued after December 1, 2017 will be publicly trusted across all browsers.

Your Action is Required

In order for this transition to work as smoothly as possible, you may need to re-validate and re-issue your SSL certificates from DigiCert’s new PKI. Don’t worry, we will guide you seamlessly through this industry transition. This process will be quick and painless, and most important: FREE. All impacted customers will receive detailed instructions via email about how-to re-issue your SSL certificate.

The re-issue process will take place in multiple phases. There is a strategy behind this transition and when to re-issue your SSL certificate based on the issue date, expiration date, and browser timeline. The start date for re-issuing your SSL certificates is after December 1, 2017.

Here is a visual representation of the upcoming dates: 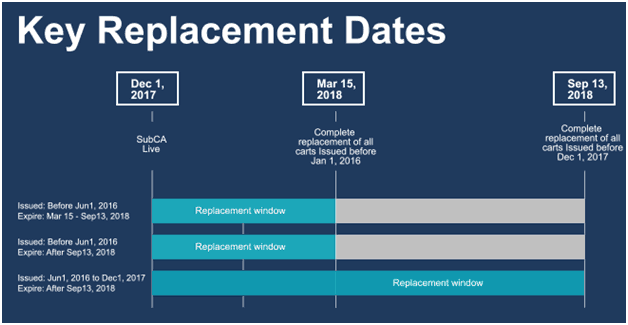 As always, if you have any questions or concerns regarding this transition, feel free to contact us.

This site uses Akismet to reduce spam. Learn how your comment data is processed.